As we all know, the wearable business is ascending alongside cell phones for as long as a couple of years. Nowadays, numerous individuals incline toward smartwatches for Health and Fitness. As the smartwatches can recognize blood-oxygen levels, note the strides under the wellness segment, etc. And it began more companies to entire into the wearable production.

The new and notable Chinese smartphone brand – Realme entered the wearable market by dispatching its first smartwatch in April 2020. Presently, it seems like Realme is handling sales of the latest Realme Watch iteration. Realme Watch 2 was made official at the end of last month carrying several new advancements and changes.

Prior to moving to the specs part, let’s overview the previous watches launched by Realme.

A year ago, the Chinese brand launched two new smartwatches in its wearable segment. Among them, Realme Watch carried a price tag of around $52, and the Realme Watch S was priced at around $67.

Below is the specifications list of the upcoming Realme Watch 2.

Similar to the previous Realme Watch, it also doesn’t feature SIM card support, and the storage option is also not available. Apart from these, a few sensors are missing compared to the other brand smartwatches. However, as the Watch doesn’t cost more than 60.26 USD, we can’t anticipate more features.

In terms of design, the Realme Watch 2 comes with a pretty impressive design in comparison with the previous smartwatches. The only difference that we can notice between the new and previous Watch is that the Watch 2 sports a full-screen display while notification width reduction. In fact, the minor changes brought an attractive design to the smartwatch. Color-wise, at the moment, it is confirmed that the Watch 2 will be available for purchase in black color only.

For protection, there’s a sturdy Corning Gorilla Glass placed on the display.

The new Realme Watch 2 is backed by a 315 mAh battery, almost two times the predecessor’s battery. The Realme Watch 2 can easily be active for about 14-15 days easily when we don’t enable the heart rate monitor. On the other hand, the Realme Watch can run up to 7 days on a single charge when the heart rate monitor is enabled. Otherwise, it can sustain up to 9-10 days upon normal usage. This development expresses how far Realme has focused and optimized battery life.

Realme Watch 2 can run entirely without the necessity of the smartphone. As always, the easy quick setup for Watch will definitely require an Android smartwatch connection via the Realme link application.

Like the predecessor, the Realme Watch 2 can be connected to both the iOS and Android operating systems via the Link app. However, it still sans the ability to answer calls and send text messages. It means the watch’s connection with the smartphone will allow you to change a few settings, switch watch faces, set up reminders, enable call reminders and notifications. Besides, you can likewise check the climate in your area, Health Reports, and turn on the find my phone feature.

As said previously, there’s a messages area where you can see the notifications within the watch itself instead of viewing them on the smartphone. The notifications from your message application, social media apps, and other popular apps can be seen inside the Watch’s message section.

Are you the one waiting to purchase the Realme Watch 2 and looking for price and availability? Realme Watch 2 is priced at 229 MYR in Malaysia which roughly translates to $55/€46/INR 4,125 in the global markets. The smartwatch will be available in Malaysia from this month. The previous generation watch was priced around $52, and it’s available for purchase via Realme online store and other major stores.

The watch will be available for purchase only in the Black color variant. 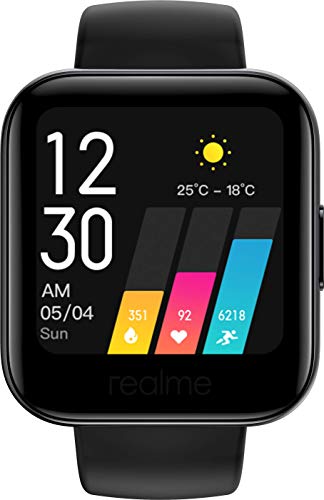