We are in deep love with Huami Amazfit wearables because of their affordable yet futuristic smartwatches. The Amazfit GTR 2e is the lighter version of the Amazfit GTR 2, but both look similar out of the box.

When comparing the Amazfit GTR with GTR 2e, the significant difference is in features but not in its design or appearance. It is also true that fewer features mean that less price and longer battery life!

Now let us have a more in-depth look into the features of Amazfit GTR 2e. 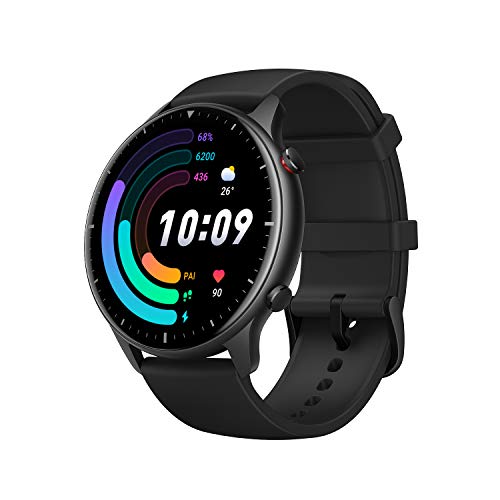 This Amazfit GTR 2e review article has included everything you want to know about this wearable. I hope this article will help you have a clear picture of the features and specs of the Amazfit GTR 2e.

As I mentioned, the Amazfit GTR 2e resembles the GTR2, but it is available in only one version and has the titanium alloy case. It means that the stainless-steel case is not available for this smartwatch when writing this review.

It comes with a brighter and colorful 2.5D curved display with a responsive touchscreen. But it does not mean that the screen is of low quality. Another notifiable difference is the lack of ODLC coating on display which is responsible for additional screen protection.

Even without ODLC coating and stainless-steel case, this smartwatch has a durable design. This makes this smartwatch waterproof up to 50 meters, just like the Amazfit GTR 2.

Like Amazfit GTR, the GTR2e also has a 46mm watch case and a 1.39-inch AMOLED touchscreen. You do not face any difficulty seeing onscreen data outdoors as it got a brighter and colorful display.

We are a huge fan of smartwatches with curved bezels like Samsung Galaxy Active 2, Amazfit GTR 2e, etc.

It also comes with a removable silicone band with a traditional strap and pin to secure it safely on your wrist. Silicone bands are best to use while doing activities that involve sweat, dust, and water.

As it supports multiple watch faces, you can customize its screen in accordance with your mood and outfit. Also, some watch face allows you to see specific health or activity data on the screen itself. Thus, you do not need to open the Zepp App to see your favorite fitness or health data.

In terms of health tracking, the Amazfit GTR 2e and GTR have almost the same features. Both the devices use the same hardware called BioTracker 2 optical sensor for heart rate monitoring and blood oxygen level monitoring (SpO2).

It also uses the PAI assessment system to measure your overall fitness based on your heart rate and other health metrics. It is almost like the active zone minutes on Fitbit wearables.

Every morning after assessing your sleep stages, it gives you a sleep score on the companion app (Zepp App). It also uses some additional data such as heart rate, blood oxygen, movement, etc., to calculate the sleep score.

As a result, the Amazfit GTR 2e always gives an accurate sleep score. If you have a low sleep quality score, it gives you some useful tips to improve your sleep pattern.

The Amazfit GTR2e comes with a bunch of sensors for health and fitness tracking. It comes with over 90 sport modes like walking, running, biking, etc., but it does not have a temperature sensor like GTR 2 watch. As a result, you might be missing an opportunity to detect the early signs of flu-like symptoms.

Back to activity tracking features, both the devices use the same motion sensors to track your steps and other daily activities.

As it comes with both GPS and GLONASS, you can use this smartwatch to track your various outdoor activities such as walking, running, biking, etc.

Also, continuous heart rate monitoring allows you to adjust workout intensity based on your heart rate. This helps you avoid any injury associated with over-activity.

As it does not have a barometer sensor, you won’t be able to track the elevation (the number of floors climbed).

Some smart features are not available on Amazfit GTR 2e to reduce the price range. The GTR 2e does not come with a loudspeaker. Another significant part missing in Amazfit GTR 2e is the music storage and music playback feature.

In Amazfit GTR 2e, you will get only a music control on the wrist. The lack of music playback and storage features is the primary reason for the extended battery life in Amazfit GTR 2e.

Both the Amazfit GTR 2 and GTR2e have a similar 471mAh battery. However, because of its missing features, the battery in GTR 2e lasts for over 24 days after every recharge.

However, the battery life of a smartwatch depends on its usage and settings. For instance, the battery drains faster while using GPS, always-on display feature, etc.

On the other hand, the battery in GTR 2e lasts 14 days. Music storage and music playback still offer a pretty decent battery life than Apple Watches and Fitbit wearables.

The Amazfit GTR 2 e is for people looking for an entry-level smartwatch with some basic smart features and functionalities. It does not offer music streaming or playback features that many opt for.

However, if you love its design and looking for a classic smartwatch design and decent health tracking and activity tracking features, then you can start to love the Amazfit GTR 2e.