Fitbit charge 3 was launched in October 2018, and just within a couple of years, the popular fitness band brand has launched Charge 4. At first glance, the two devices are identical twins, but Charge 4 has some upgrades that make it much superior to Charge 3.

You won’t notice them until you make a close comparison of Fitbit Charge 4 vs Fitbit Charge 3. That is exactly what we have done for you today. We have compared the two Fitbit Charge for features like design, sensors, app, battery, etc., to give you an idea of the difference between series 3 and 4. And I hope this will help you to choose the best Fitbit Charge.

If you are in a hurry, look at the table for instant insight and decide which one is the best fitness tracker. 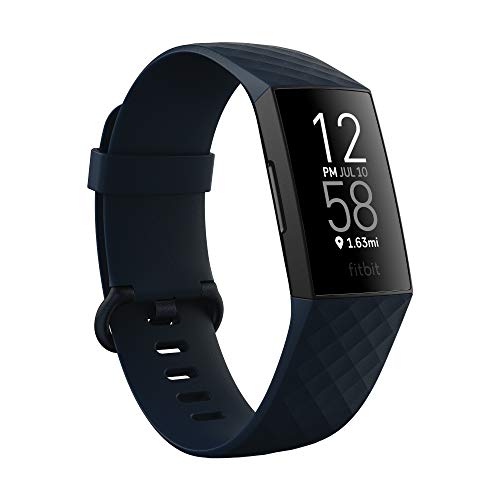 Not until you put the two Charge on your writs can you make the right Fitbit comparison. The tapered design is prominent in both, but you will notice the difference in size. Charge 4 is much bigger than Charge 3.

The bigger size means a bigger display. However, the resolution of both OLED displays is 100 x 160. But this new Charge 4 has come with adjustable display brightness.

And in terms of navigation menus, there are no significant changes. Charge 4 has all the same swipes and taps as Fitbit Charge 3. If you migrate from earlier devices like Fitbit Charge 2 or Fitbit Charge 3, you will not feel much difference.

When you compare Fitbit versa 2 vs Fitbit Charge 3, there are significant changes in the way you navigate. So, if you use Versa 2, navigation in Charge 4 will also be different.

In addition to size, both Fitbit Charge uses aerospace-grade aluminum cases, and to protect the display, it has Corning Gorilla Glass 3. Even the buckle designs are the same and made of anodized aluminum.

However, Charge 4 variants have the same Fitbit Charge 3 colors except for one additional new color.

The core of any fitness tracker is an array of sensors. Fitbit – Charge 3 is loaded with robust sensors, and Charge 4 takes it further. It’s here you will find an answer to Fitbit Charge 4 vs Fitbit Charge 3.

Most of the sensors, like relative SpO2, accelerometer, gyroscope, altimeter, optical heart rate monitor, and even Vibration motor, are the same. The only addition you find in Charge 4 is its in-built GPS. It helps you to track your real-time pace and distance.

Fitbit Charge 3 sport band requires smartphone connectivity to use the GPS because it has no in-built GPS. But Fitbit now gives Charge 4 what Fitbit Charge 3 fitness tracker lacks. This makes it one of the few fitness bands with inbuilt GPS. So, you do not need to carry a mobile phone to explore new routes that are unknown to you.

Moreover, the NFC sensor, available in a Special Edition of Charge 3, is now available with all versions of Charge 4. This allows the user to make payments using Fitbit Pay right from their wrist.

If you compare Fitbit charge 3 vs. versa 2, Charge 3 doesn’t support as many apps as Versa 2. Ignoring that fact, Charge 3 does support some useful apps, and Charge 4 inherits the same apps. These similar apps include weather, timer, alarms, exercise, and relaxation. However, with Charge 4, you get two additional apps, namely Agenda and Spotify.

Agenda is a calendar app. You can set events and meetings. It is a useful app because you can set a lot of information about events like start time, date, length, and location with just a few taps on your wrist.

Spotify is a popular music streaming app. You can manage your music on all smart devices using only Charge 4. But you need to have Spotify Premium Subscription to access this feature.

Apart from these two apps, everything is the same. Replying to calls and text messages is similar. You can receive notifications just like Charge 3.

All these functionalities are available with Charge 4 but with two additional functions, such as Active Zone Minutes and Workout Intensity Map.

Active Zone Minutes is an impressive functionality. Users can earn active zone minutes by doing any activity that increases their heart rate. These minutes are nothing but a time measurement; the user’s heart rate is at its peak.

You can set different Active Zone minute goals every week to improve your health.

Since the Fitbit Charge 4 has GPS, you can map out your activities at different locations. It is useful for users who like tracking outdoor activities.

Fitbit Premium subscription can add a little extra to your device, but it will cost you an extra $9.99 per month(approx). The brand is continuously adding new integration to help the user get the best out of its devices. They regularly update programs that help you improve your health. With Charge 4 and a premium subscription, you can access three new programs, including mindful eating, strength training, and gym cardio.

Fitbit says it’s both Charge series tracker have battery that lasts for over seven days on a single charge. But there is one disadvantage of having Charge 3 Fitbit. Since it needs to pair with a smartphone for GPS, it eats up a significant amount of battery. The battery life of Charge 3 drops if in the GPS mode. This is one major point to note while comparing Fitbit Charge 3 vs. Fitbit Charge 4.

Though the design and built quality are the same, new sensors add a lot of functionality to the Charge 4. When comparing Fitbit Charge 3 vs. Fitbit Charge 4, you will see Charge 4 packs GPS, NFC, and additional app support like Agenda and Spotify.

No doubt, the Fitbit Charge 3 band performs better than other fitness trackers in the market available now. Even if Charge 3 got many positive reviews already, we have to admit that it lacks GPS and NFC.

With Charge 4, Fitbit has overcome those cons, which will further strengthen its market share.

If you are looking to upgrade your fitness tracker, we recommend you to go for Charge 4. You can make the most of the Charge 4 if you can throw in a few bucks in Fitbit premium subscription.