Smartwatches and fitness trackers are the latest trends in wearable technology. They can do many things that your smartphone can do, but they’re on your wrist instead. However, one thing that many people wonder about is whether or not these devices come with cameras.

In this blog post, we’ll take a look at whether or not smartwatches come with cameras.

Do Smartwatches have cameras?

No. It would be nice if they did one, but smartwatches don’t have cameras because they have smaller and shorter battery life. Including a good quality camera and associated sensors would make a smartwatch bulky, which would defeat the point of wearing one. In essence, it’s like you’re wearing another device on your wrist as well.

But there are some exceptions! Now let us look into popular wearable technology brands like Apple, Samsung, Fitbit, etc.

Do Samsung Smartwatches have cameras?

Latest Samsung Smartwatches like the Galaxy Watch 4, Galaxy Watch 3 do not have cameras. Except for a digital camera, these smartwatches come with advanced sport and health tracking features, including wrist-based wireless ECG, blood oxygen, built-in GPS, and many more.

However, one of the older smartwatch models from Samsung, the Gear 2 Neo Smartwatch, has a camera built-in. However, the future Gear models, like Gear S3 and Gear Fit 2, came without a camera.

Do Apple Smartwatches have a camera?

No. The Apple Smartwatches do not come with a camera. They have advanced sensors to monitor your health and fitness but do not have a camera.

A company called “Wristcam” makes wearable cameras for the Apple Watch. It allows you to take 4K images and 1080p videos on the go. The smart Apple Watch camera will enable you to take videos and pictures on the go, and it is available for 41, 42, and 45mm Apple Watches. 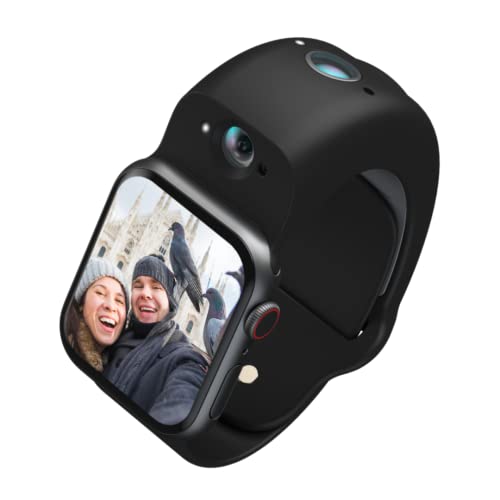 What do we like about the wearable camera for Apple Watches by Wriscam?

What do we not like about the wrist cam?

If you decided to buy the Apple Watch wrist cam, here is a good video on setting it up.

Do Fitbit Smartwatches have a camera?

No. The Fitbit wearables do not have a camera. Fitbit is a fitness band company focusing on health and fitness tracking. This wearable manufacturer(at least for now) has no plans to include a camera on any of its trackers or smartwatches.

If you plan for the best camera smartwatch, there is no better option than the Apple Watch with the wrist cam. Even though some Chinese wearable gadget makers offer smartwatches with a camera, we do not recommend you buy them because of their poor picture/video quality and brand value.

I hope that we have answered your question, “Do smartwatches have cameras?”. We are here to help! If you have any further questions, take advantage of our comment section.